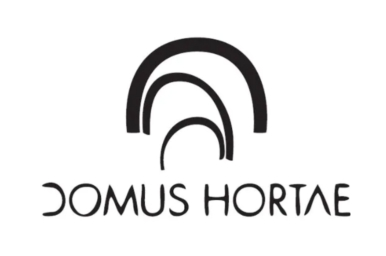 IN THE HEART OF PUGLIA

Domus Hortaeis the Fioretti family business always has been committed to the cultivation of vineyards, which takes care of it with utmost dedication and passion since 1788 AC, enhancing its productions.

The love for the land of the Fioretti family has its roots in distant times.

Some ancient documents found in the Diocesan Archives, would identify in Matteo Fioretti the first Fioretti ancestor, arrived in 1788, in the countryside of Orta Nova, a municipality located in the center of the Tavoliere delle Puglie, precisely in Grassano delle Fosse, as lists of the land registry.

Passo di Grassano, so called on historical maps, is one of the districts adjacent to the “Locatione D’Horta” connected to it by underground walkways, above which are planted the family vineyards, which led up to the town where it was located the Domus of Frederick II.

The term DomusHortae derives from the Latin “Domus”, that is, a residence intended as a family home, a place designed to preserve the flavors of a tradition that is perpetuated in a centuries-old family farming, but is also the ancient to ponym of Orta Nova town. In fact, the words Domus Hortae were used by Frederick II of Swabia to identify one of his residences.

He moved to the Land of Capitanata to reorganize the territory, which soon saw a flourishing rebirth, building many domus, “Masserie” and “Castrum”. Capitanata becomes “Caput” of the kingdom and then the words on an epigraphic framet found near the (Castle) Domus of Orta.

Region of southern Italy located furthereast, historical bridge between east and west, so rich in culture, art, traditions, food and wines. Despite being washed by two seas and its elongated shape allows it to enjoy the benefits of this proximity, Apulia is a region characterized by drought, an important feature for the production of excellent wines.

The toponym Apulia, in fact, would originate from Apluvia, meaning land without rains.

In fact, even for this reason, until the middle of the twentieth century, the name Apulia was used declined in the plural, Puglie.

It is a territory located in the north of Apulia and takes up almost half of the Capitanata region. The Tavoliere is a lifting plain (in fact it was once under the sea level) and is entirely flat.

It extends for about 4000 km² between the Daunimountains to the west, the Gargano promontory and the Adriatic sea to the east, the river Fortore to the north and the river Ofanto to the south.

It is the largest southern plain, geologically classified as a prehistoric seabed.

The name Tavoliere derives from the Roman land register, organized in Tabulaecensuariae, on which were noted the land properties used for grazing or cultivation.

The climate is mainly Mediterranean, influenced by the sea, although in winter it often reaches continental points. In spring and summer it is often marked by drought, which makes the environment particularly suitable for growing vines, since it has an enormous tolerance for excessive hot weather, since it has a highly developed root system capable of reaching great depths.

One of the most important climatic factors for the cultivation of vines is water, which actively participates in the metabolism and plays a prominent role in the distribution of mineral components in grapes.

The charming Orta Nova town is located in the center of the “Tavoliere delle Puglie”.

Although recent discoveries place its origin in Roman times, only in 1142 AC the toponym of “Orta” is attested in acts.

Later there will be news of an imperial residence, erected by Frederick II, mentioned on aepigraphic fragment, of which only a photographic documentation made by the Haseloff in the early twentieth century is left.

In 1429 AC the “mena”, so-called Transhumance, was established, then regulated in 1447AC with new rules by Alfonso d’Aragona. These pastures, gathered in areas, were given the name of “leases” and in 1548 AC the “lease of Orta” was established.

On 2 November 1611 the feud was bought by the Jesuits who began the transformation of the imperial residence. The Jesuits, well-known enthusiasts of the vine cultivation, began to modify the agricultural territory, transforming in part its structure.

Expelled the Jesuits in November 1767, the large feudre turned to the crown. In 1773 AC, at the behest of King Ferdinando IV, as evidenced by the document found among the papers kept by the Foggia State Archive and partly reported:

“The lands of the “Tavoliere di Puglia” that are called the Five Royal Sites, and which are assigned in the census to ‘natural de’ municipalities of Orta, Ordona, Carapelle, Stornara and Stornarella,

belonged once again in feud to ‘PP. Jesuit.

When in the suppression of the Jesuit order in the kingdom of Naples,they became fiscal properties, the government wanted to meet the needs of the dissatisfacted farmers who had used it, adhering to their requests, and distributing the lands to them. So it was that in the year 1774 they gave“concessions”to the inhabitants of the indicated Sites, consigning to each of them12 hectares for sowing, a rural house, and a pasture on  the same lands for the nourishment of the animals necessary for cultivation. “

The families who took part in the Orta “concessions”came from the Capitan at a region, from the land of Bari and from the Principality Ultra.

Being assigned the 12hectares, gave the new farmers responsibility and encouraged them to diversify and improve the cultivation of the land, until that time dedicated only to the trans human pasture and crops attached to it.

It is from this moment on that the territory begins its a scent in the viticultural field. From 1774 on wards, many recipients families came from the border lands.

In 1806 Orta was erected as an autonomous municipality and in 1863 the Nova suffix was added to distinguish it from other Italian towns with the same name.

The strong bond between passion and work, ardor and hard work, imparted from father to son, allowed to pass on the heritage, in addition to the land and vineyards, the love and dedication to the land to the future generations of the family.

In the heart of this land, even today, the Fioretti family, with a modern entrepreneurial spirit, enriches the company with specific technical skills in the cultivation and management of the vine, embellishing what the ancient tradition of a family has left as a passion.

The “ortese” farmland is characterized by a very heterogeneous and diversifiedsoil in the various zones that identify it and by a microclimate that gives strong temperature excursions between night and day.

The combination of all these factors make possible that this microenvironment gives  the vineyards, of this wonderful land of the Tavoliere, peculiar characteristics.

Surrounded by mountains and seas, they are able to produce grapes whose wines will have aromatic complexity, an important supply of alcohol and a consistent body.

In particular, the company’s lands, located in the Grassano area, are of medium mixture, calcareous, sub-alkaline and a presence of stonearound 20%.

The texture of theselands, thanks to the excellent drainage and the presence of the sedimentary rocks that compose it, will give the wines minerality, structure and important alcohol content.

The complex of these characteristics, gives the vines the possibility to vegetate and to give the fruit its typical and unique characteristic, peculiar to the production of elegant wines with an intriguing personality.

The company’s vineyards currently in production, implanted from 8 to 12 years ago after a careful analysis of all the pedo-climatic factors, were carried out with the aim of producing quality grapes. DomusHortae follows the strict application of all the principles of integrated agriculture with the further exclusion of all products with an unfavorable toxicological profile for both man and the environment, preferring the use of some specific formulations for organic agriculture.

Weeds are managed with mechanical interventions, favoring the biodiversity of the entire vineyard ecosystem. The agronomic practices are mainly manual, a sit was transmitted to us by our ancestors, this to allow the vine to naturally achieve its equilibrium with the environment, from the pruning stage to the care of each individual bunch from the stage of bunchformation to harvesting. For the grapes used for the processing of the long aged wines the bunches are thinned out during the fruit set stage and the harvest takes place after drying of the bunches on the plant, by manual harvesting with careful selection of the bunches.

It is the vine that has the focus in the history of our territory before and, of the Domus Hortae, after wards it has ancient historical roots wrapped in myths and legends, first of all the docking of Diomede on the Tremiti Islands (also called Diomedee Islands) and then he founded Arpi and Canosa going up, with his boat, the Ofanto river. The name of the vine is believed to come from the famous ancient Greek city ‘Troia’ (Ilium)

An average productive vine, resistant and well adapted to the hot and aridclimate of northern Apulia. The plant takes advantage of prolongeds unexposure and resists long drought periods, typical of the Apulia region.

It is a native red grape variety par excellence of northern Apulia. The red and compact bunch, the medium berry, spheroidal, with skin covered with pruina, thick and coriaceous. The pulp is not fleshy. From these grapes a ruby red wine with violet reflections is obtained with pleasant aromas and strong structure. Also vinified as rosé. 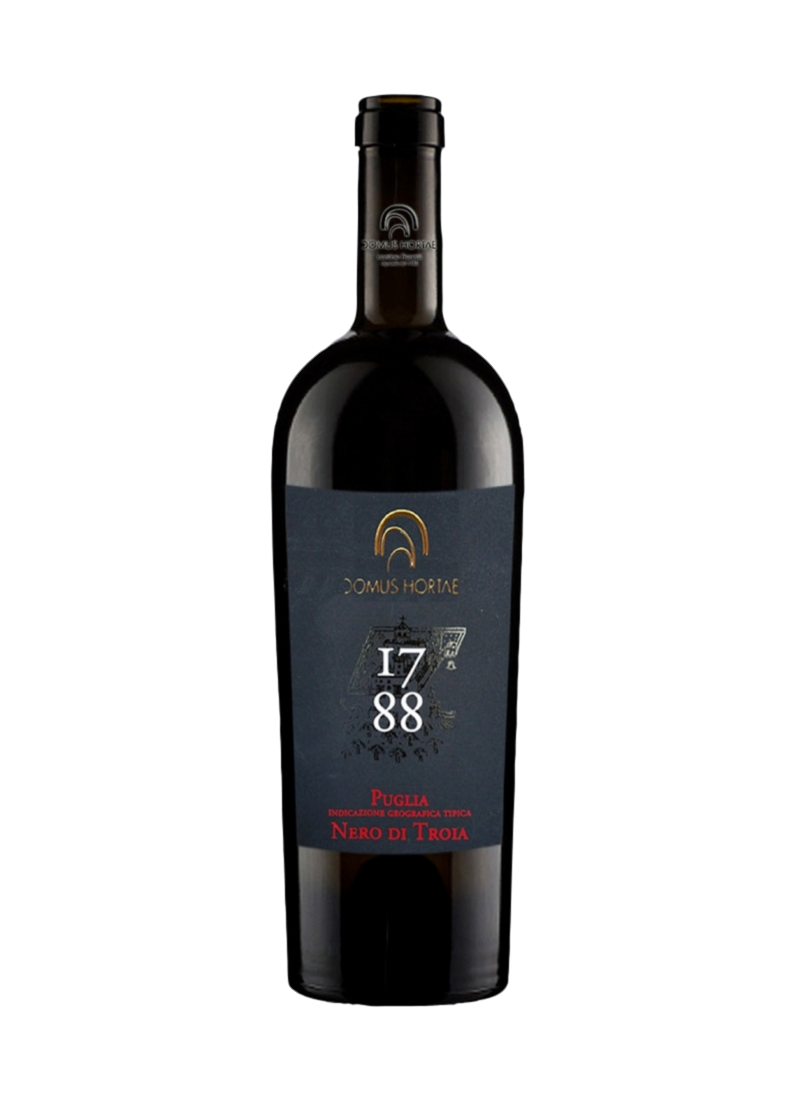 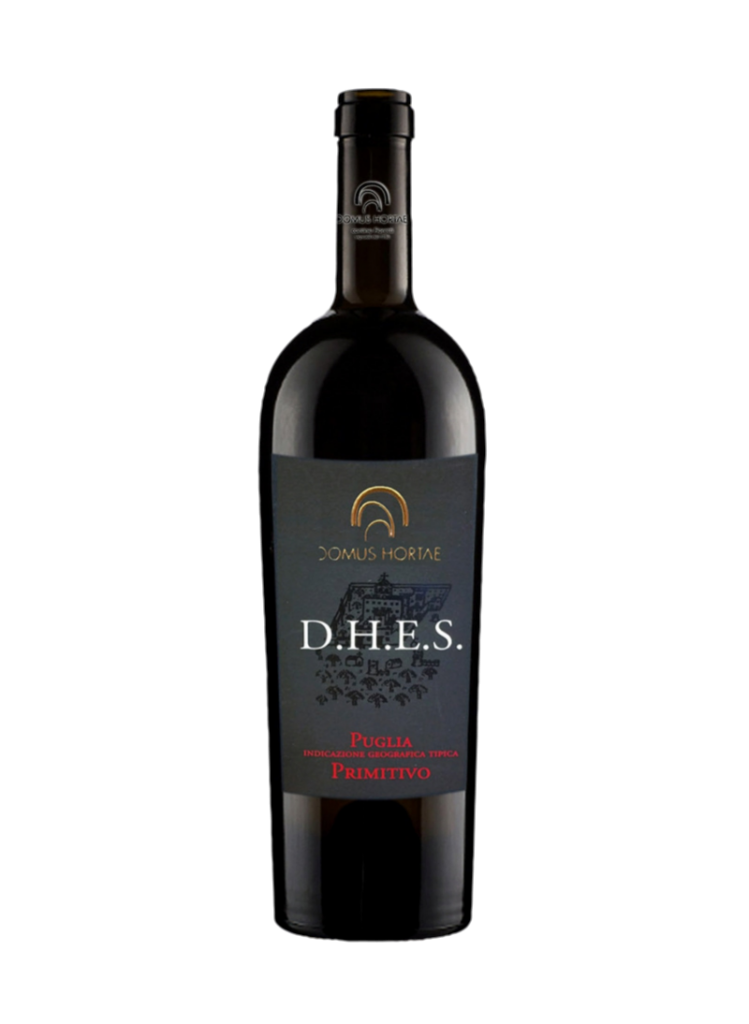 The name “Primitivo” is due to the precocious ripening of the grapes. Primitivo is an Italian blackberry vine, the dark blue skinrich in anthocyanins and pruina, of medium thickness, lends itself to drying. The grape has medium size and is spheroidal. The pulp is fleshy and the juice is very sweet. The wine has an intense ruby red color, almost impenetrable. The nose releases a romas of dark fruits and spices. In degustation it is warm,  soft, structured and of good persistence.​

KALI, nice !! In Greek it was the ‘good’ wish … good day, good evening, good … ….For us it is the cin cin of a good glass of (of ours) ‘Nero di Troia’. Nero di troia single variety produced in our vineyards in the contrada of Grassano delle Fosse. The careful management of our vineyard, the caring harvest, the assiduous effors to winemaking and the scrupulous ageing in steel tanks complete our idea for this wine. 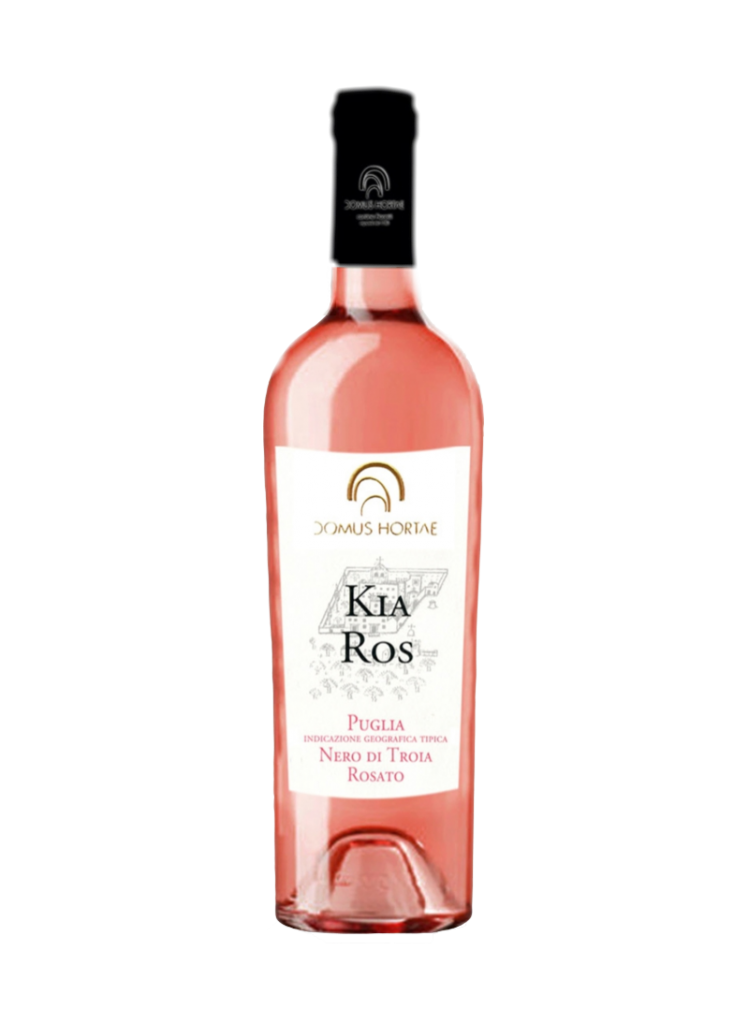 KIAROS, from Kairos, the “cairological time”, the ‘opportune time’, ‘right time’ or the supreme moment of indefinite time in which something special happens. It is time meant as quality and not as passing time.

Our Kia Ros, Nero di Troia vinified in “Kiaros” (light white process), is the result of grapes harvested when the curve of acidity and the sugars one intersect to reach the quality optimal point, difficult to find .. but excellent (ideal) result ….. for a perfect balance between freshness and softness.

ReMoto, a red that comes from afar, ancestral, deep, the King of the Motions of the soul.

Leonardo da Vinci in his paintings was the first to “understand every form according to appearance and its internal cause” Vinification and first aging in steel, light passage in French barriques for three months are our concept for this primitive. 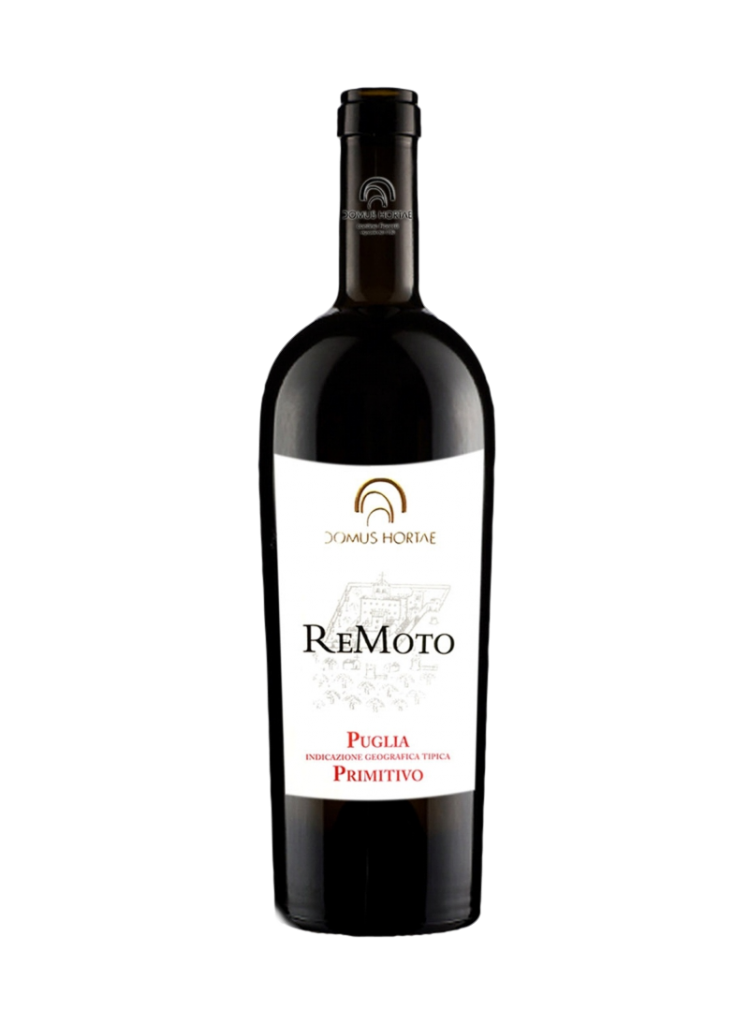 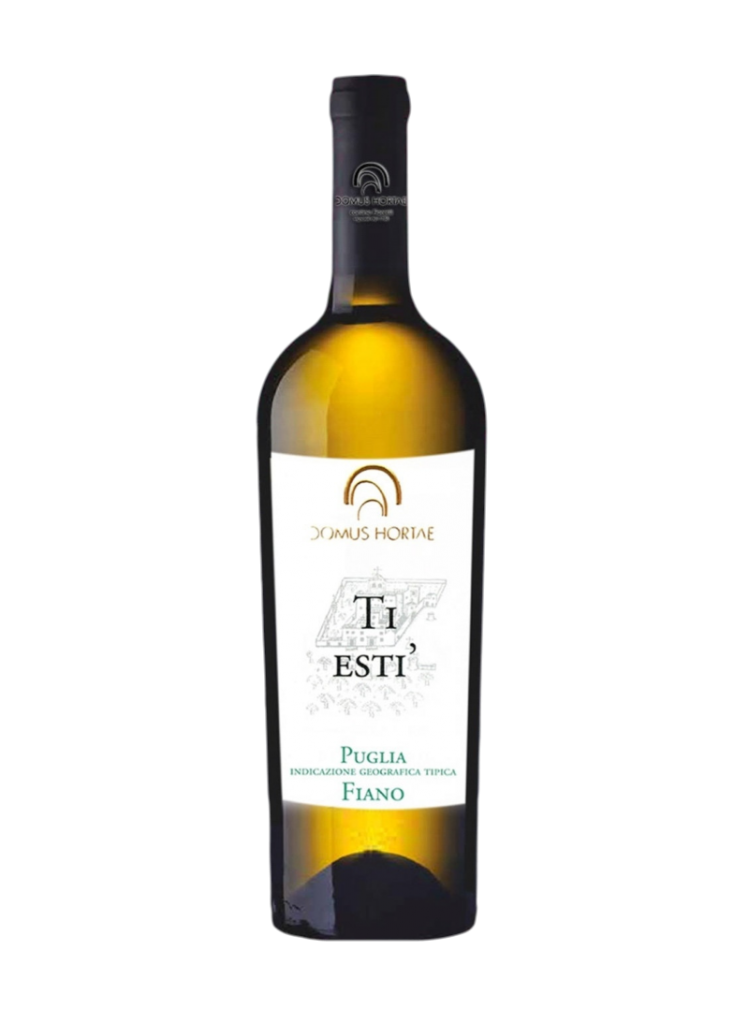 TI ESTI’ (what is it?) Is the question that Socrates asked his interlocutors to go back to the premise, to break the rhetoric and to arrive at a rational and correct definition, clear and identified.

The “Ti esti” is the inescapable starting point for any rational comparison that evades from the clichés and identifies, in the inebriating aro.